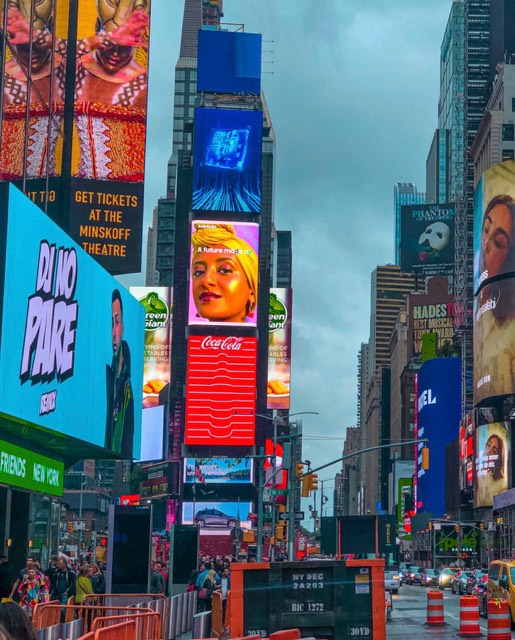 Times Square is a major commercial intersection, one of the most visited destinations in New York city, and a really famous entertainment center in midtown Manhattan. “The Center of the world” is one of the many ways to refer of Times Square, this important epicenter stretchs from west 42nd st to west 47th st, and a huge quantity of Billboards and advertisements adorn this magic place.

2.In 1904 The New York Times operations were moved to Long Acre Square, by its owner and publisher  Adolph S. Ochs, building the Times Tower, which was the second tallest building in the city at the time.

3. The first Times Square New Year’s Eve celebration was held in 1903 when the New York Times newspaper office decided to celebrate the company’s opening in Times Square. Approximately 200,000 people attended the event that it became a new tradition. The ball was made by “Waterford Crystal.”

5.It costs between $1.1 and $4 million a year to buy advertising space in Times Square.

6. Times Square is home to MTV’s headquarters, ABC’s ‘Good Morning America’ is broadcast in front of a live audience from its office at 44th and Broadway and other different shows.

7.A naked cowboy, superheroes and sesame street creatures, are waiting for you to take really fun pictures!

8. There are around 85 restaurants near Times Square, for all type of budget, taste and cultures! Let´s name a few:

9.Times Square is the perfect place to go to watch a movie and also a play! Movie theaters and Broadway shows are some of the many attractions that you could find in this location!

10. You can go bowling at the Bowlmor Times Square!

Wether you want to go shopping or just have some drinks at a bar, Times Square is the right place but only if you don´t mind people running around and taking photos all the time! this place is always full of joy, bright colors, music and street food!

A writer who has written poetry and crime books, who writes blogs and anything that can be expressed by words.

Originally from Colombia and currently based in the United States, stick around to explore the world together!